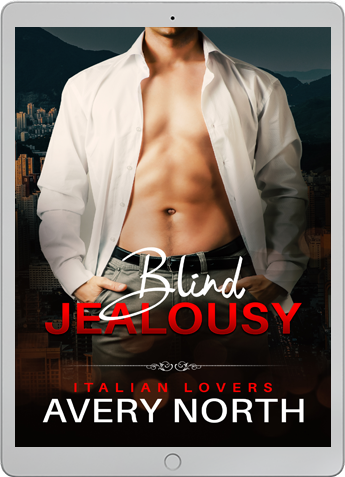 Get Your Copy Of Blind Jealousy

A carefully-told lie could destroy their love forever…

Rescued from the cops by Alessandro’s friend Lorenzo and with the feud between their families buried firmly in the past, Gianna dreams of finalizing their engagement and making Alessandro hers. From a magical proposition in Italy to a party in New York, it seems that everything is finally going right for them.

But lurking in the shadows is Gianna’s jealous co-worker Charlotte. She hasn’t forgotten about Alessandro, and she’s determined to do whatever it takes to claim him for herself… and when she convinces Alessandro his fiancé has been cheating on him, his fiery temper does the rest.

Enraged at Gianna’s betrayal, Alessandro disappears to throw himself head-first into his restauranteur dreams and forget all about her. After everything they’ve been through, he can’t believe she’d betray him like that. With Lorenzo scrambling to figure out what’s going on, Gianna’s own emotions run wild as she grapples with his accusations. How dare he accuse her of being unfaithful!

Just when it seems like all hope is lost, can Lorenzo work behind the scenes to help them rediscover the passionate love they share? Or will Charlotte succeed in ruining their relationship for good?

Buckle up for the thrilling next installment of the Italian Lovers series. With emotions running high and plenty of drama, this riveting romance novel is one you won’t soon forget. Scroll up and grab your copy today!